2005 // Tree Hugger Receptacle /
--
Performance Specs (Specificity and Spectacle)
-
This receptacle is a pragmatically and propagandistically designed object. It operates as a recycling collector for composting three materials: plastic, glass, and aluminum. It is also designed for public users to perform an affective gesture regarding the act of recycling and to reaffirm what it means to care for our environment.
-
The project begins by selecting a tree located from the designated outdoor exhibition area as a site. Resembling its name, The Tree Hugger Receptacle wraps around the tree to serve both structural anchoring and functioning purposes. Three separate receptacle entries stem, one for each type of material. To accomplish the act of recycling, the user literally ‘hugs the tree’ to deposit the recyclable items. He/she outstretches both arms into a specified channel that is around the tree, designating the left hand for pulling open the receptacle flap and the right hand for completing the act of recycling.
--
Assembly Direction: Material and Fabrication
-
Tree hugger Receptacle’s envelope is generated by folding a single sheet of pulp-based material for recycling capability. The design can be laser-cut from a sheet as a pattern for assembly. Its construction logic emulates the cardboard storage box technology. The adaptability of folding as tectonic research can produce multiple surface variations that conform to the tree location and its site specificities. A folded surface could also be designed to sustain its own weight and enhance its rigidity. The same material could serve as both skin and structure of the receptacle.
-
The actual containers for recyclables are made from corrugated cardboard strips. They can be detached from the duct branch for general collecting. The method for fabrication is derived from basket weaving technology. The shells of the containers are permeable by air, allowing the recyclables to breath. As an option, a typical recyclable trash bag can also be inserted as the interior of the receptacle container.
--
Symbiosis
-
As we examine the power of action and activism, this project contemplates cooperative relationships between layers of cognition. The project generates the tree-hugging event that initiates the act of recycling literally and symbolically for promoting a sustainable environment. The formation of the project takes all three parts to complete the performance of recycling activity. The first step of designating tree as the site involves the participation of nature. The second element is the receptacle itself, a tool and machine for recycling that represents technology. The third part is assumed by the active human figure, which performs and completes the production of recycling. It is the interest of this project to close the loop by laminating all three elements as integrated and symbiotic as possible.
--
Project Lead: Andy Ku // Project Team: Andy Ku, Kam Ku, Lionel Lambourn 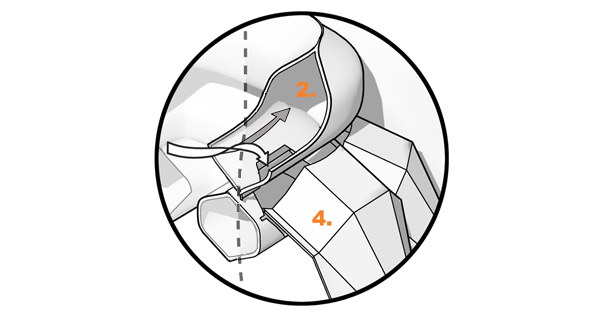 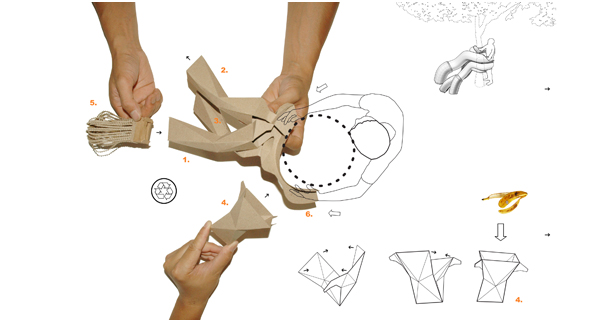